After an exciting year full of unforgettable projects and overall experience, the time has come to elect a new motivated individual who would take over the role of Student Board Representative. Therefore, I am calling for elections of a new CEMS Global SBR for the upcoming year.

There is a number of reasons why to apply for this position – the major opportunities involve:

If interested, please submit your application consisting of CV and Motivational Letter (no longer than 1 A4) to jakub.mazal@cemsmail.org by next Sunday, January 10th, 23:59 CET. The candidates will then be announced together with their applications via email, Facebook and our website.

You can find more information on the dedicated page!

In case there are still questions or concerns that have not been addressed above, please do not hesitate to write me an email or message me on Facebook.

Take a stand and tell us how CEMS Club Prague performed.

From the rookie weekend to the CEMS Christmas Party, we have been thrilled to welcome you and help you bond with your fellow CEMSies and engage with our corporate partners!

For a CEMS Club to be eligible for the awards, at least 50 % of the students in CEMS year at the school must have voted by January 16th, so your vote counts! The club counts on you to win the following awards:

Vote on your student zone!

Join us in welcoming the new CEMS Club President Natalie Badie! Natalie and her team are ready to put their experience to use to bring CEMS Club to further prosperity!

With a strong will to build on the sense of community, the new CEMS Club will strive to involve as many students as possible by bringing the best from Clubs worldwide, detailed information on coming events and online payments!

Take a look at the full programme in attachment!

Once again, welcome the new CEMS Club board!

Further position will be open later on, stay in touch!!

After great year of leading CEMS Club Prague, the time has approached for a new motivated individual to take over the reins. Therefore, I am calling for elections of a new CEMS Club president for the Spring semester of 2016.

There is number of reasons why to apply for this position – the major opportunities involve:

If interested, please submit your application, including CV and Motivation Letter to jan.volny.jr@gmail.com by December 13th, 2015. The candidates will then be announced together with their applications via email, Facebook and our websites (cems.cz). All CEMS students with VSE as a home university will have opportunity to vote for their future CEMS Club president.

Your time to shine has come!

Any questions ? Please take a look at the below additional information:

Who is eligible to run for the CEMS Club President?
In the first round, everyone who will be in Prague for the summer semester 2015/2016 – that is home students (both first and second year present in Prague from February 2016), as well as incoming exchange students. In case there are no candidates in the first round, the CEMS Club Prague might extend the election towards those students going abroad for the exchange semester. However, remote leadership of the Club creates more hurdles than benefits and would not be preferred.

Who is eligible to vote for the CEMS Club President?
Every student with Prague as a home university (both first and second year students), as well as incoming exchange students. Also, the candidate himself/herself is eligible to vote.

What is the voting process?
The candidates will be revealed on Facebook and their applications will be sent via email. Students will then vote by sending an email to info@cems.cz with the name of the candidate. If there would be only one candidate, he/she becomes president instantly.

Do I have to commit for one year (i.e. two semesters) or one semester only?
The whole handover process, as well as building the team, knowledge and experience takes time. Therefore, we prefer to see certain fluency and would be happy to see candidates willing to lead the CC Prague for two semesters. However, there is no rule prohibiting you from running for the President if you can perform the role for only one semester.

Do I have to run with a whole team of CEMSies for each and every position in the Club?
Obviously, it might be a benefit to show that you already have a team of motivated students willing to contribute to the Club under your command. However, this is not a requirement and from past experience, the club’s head will not have troubles to find motivated students willing to join the club after elections.

Is there election of all the roles? Who is actually elected and who is appointed?
Only the CEMS Club President gets elected and it is his/her responsibility to build up the team taking care of the various roles within the Club (for further details, please see the current team structure). I am holding the elections now to allow sufficient time to build up the team and get everyone on board before the next semester starts.
The only member of club besides president that has to go through the election process is the Student Board Representative and is elected independently on the current team for period of 1 year.

The CEMS Programme cordially invites all VŠE students to the evening session MEET THE CONSULTING WITH CEMS, which will be held on Tuesday, November 10, 2015 at 19:45 in RB 212.

If you are interested in consulting, come and meet consultants Štěpán Švarc and Martin Hudoš from Deloitte and Jan Hadrava from PwC. Each company has prepared a 45-minute presentation on the topics: “Am I consultant?” and “How It Works in Consulting”, which will be followed by Q&A.

The evening will end up with a networking cocktail. Small refreshment will be offered then. If you are interested, please register here: https://docs.google.com/…/1svU0Lr60S3plSut5S6sCL0…/viewform…. The lecture will be held in English.

It is our pleasure to inform you about a new, already the forth, round of CEMS Mentoring at the University of Economics in Prague.

Do you want to take your personal development one step further? Do you want to receive personal and meaningful advice? Expand your network? Acquire new perspectives? Then don’t hesitate to this semester’s round of the CEMS Mentoring Programme.

Many successful people reached their success because of their mentor, a trusted mentor can be a key figure in one’s career development.

How to join the CEMS Mentorship?

A Mentoring Evening will be held on November, 2nd for you. It will be about setting the right expectations about the program, getting to know your potential mentor, and enjoying a glass of wine in a nice wine house.

Please note that it is not necessary to join the Mentoring Evening in order to become CEMS Mentee, however, it is highly advised.

After the event you will be matched with your mentor according to your preferences (we will do our best!) and from then you can start experiencing what a good mentoring is about  – for a semester or even life-long, personally or online, it’s up to you!

If you want to know more, please don’t hesitate to ask Lucie your questions.

We are looking forward to receiving your questionnaire and seeing you at the Mentoring Evening.

Welcome to cems.cz! We have revamped the whole website in order to serve you better! What can you expect from it ?

As a CEMSie, here’s what you get :

As a future CEMSie, you will find more information about the CEMS master programme at the University of Economics, Prague. We give you application tips, an overview of what CEMS and the club has to offer and even more is coming!

This is just the beginning ! A few projects are on the table :

In the meantime, feel free to contact us through email or Facebook! We’ll be more than glad to help!

So many choices, but some are better than others

Come to talk to Branislav Klesken from LEAF who is transforming an educational system in Europe, and discover what it takes – and what it feels like – to have social impact. We, in our turn, will show you how McKinsey can help you achieve such goals in an innovative and entertaining way, full of learning and development opportunities. 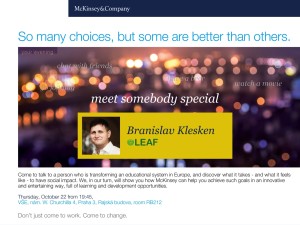 Our corporate partner Groupe SEB is glad to announce the launching of the 4th edition of Group SEB Academy, the innovation challenge dedicated to students from all over the world.

This challenge, in partnership with the French company Agorize (Studyka.com), is challenging students to revolutionize the kitchen of tomorrow around three themes.

How to participate?
In teams of 2 to 3 members, students have to submit their projects as 15 PowerPoint slides or a Wix website, according to your choice. This project must be in French or English.

The preselection file should be submitted online on the Studyka platform before December 6, 2015 to convince managers of Groupe SEB.

The Boston Consulting Group cordially invites CEMS students to take part in “BCG Networking Event MEET US” that will be held on Monday, October 19, 2015, between 6 – 9 p.m.

END_OF_DOCUMENT_TOKEN_TO_BE_REPLACED

CEMS Club Prague is a group of highly motivated students who take care of other CEMS students. We prepare various social, teambuilding, educational and PR events!